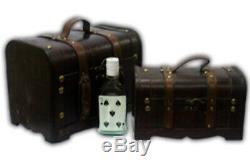 Card to Bottle Nested Boxes - 2 Piece Set. The performer shows an empty bottle and places it inside of a small treasure chest that is then placed inside of a larger. And left in plain view of the audience. A helper chooses a card from a deck and shows it around to the rest of the audience. The large chest is opened and the small chest is removed, tilted and opened toward the audience so that the helper can reach in and grab the empty bottle that was placed in there before the effect started and much to their surprise, the chosen card that was vanished from the deck is now sealed in the bottle.

Spectator can retrieve the bottle! Clever Update to the Original Harbin idea! Everything but the deck of cards is included!

The item "Card To Bottle Nested Boxes Two Piece Set Magic Trick" is in sale since Wednesday, May 1, 2019. This item is in the category "Collectibles\Fantasy, Mythical & Magic\Magic\Tricks".