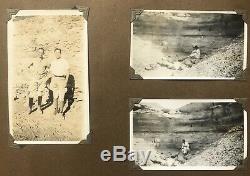 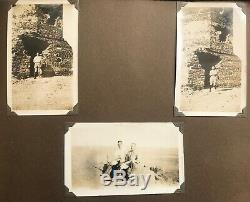 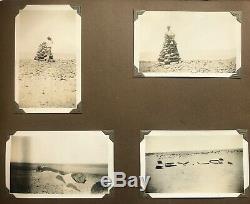 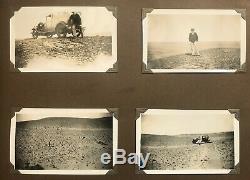 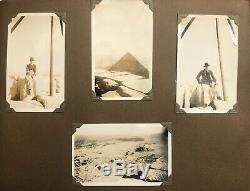 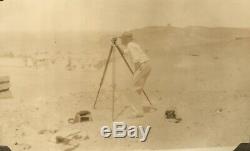 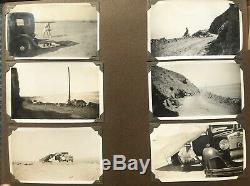 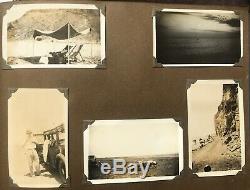 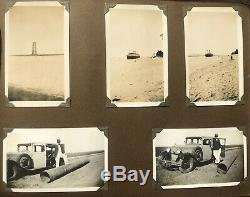 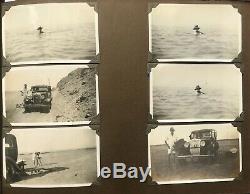 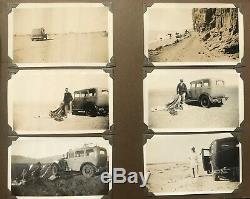 [Egypt] 1933-35 Album of Photographs Taken by Two Royal Horse Artillery Officers on Motor Car Camping Trips To The Desert and Historical Sites. An album of photographs showing two Royal Horse Artillery Officers during motor car camping trips whilst on leave? To the Egyptian desert as well as historical and archaeological sites in Egypt, as well as a couple of Syria and Libya.

The more senior man (Eric Yelverton) has gifted the album to the junior officer (Leslie Crane) as a Christmas present in 1935, and some of the captions to the reverse of the photographs show that they were great friends - referring to him as My Chum Les. The album is signed with both of their initials From E.

Eric and one of the photographs show both of their initials marked out in wood in the middle of the desert. They travel around in a Morris motor car (named Jane) which has a canopy, tent and table & chairs which they set up, and there are several showing them enjoying picnics and generally larking about.

Their names are thankfully identified to the reverse of a couple of photographs, and others have occasional annotations to the reverse. There are a few views of the R. Camp and some background signage shows it to be Chestnut Troop. Their common interest seems to be sites of historical interest, and there are numerous photographs of them at the pyramids, monasteries and archaeological ruins, one appears to show Eric using a surveyors theodolite. Whilst on these trips they are wearing regular clothing and are not in uniform.

Two photographs taken in the Gulf of Suez show lengths of oil? Of the 155 photographs in the album, less than 20 are taken back home in England and generally show Erics family or horses, as well as his wife and son. The vast majority of the photographs are approx. With occasional annotations to the reverse. All are neatly mounted into the album by photo corners and can be easily taken out.

All are housed in a blue cloth album. The item "Egypt 1933-35 Photograph Album of Motor Car Camping Trips by Two RHA Officers" is in sale since Tuesday, July 7, 2020. This item is in the category "Collectables\Photographic Images\Antique (Pre-1940)\Photographs". The seller is "ephemeracity1" and is located in Dorset.

This item can be shipped worldwide.