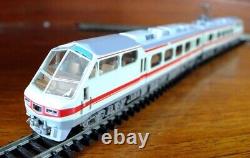 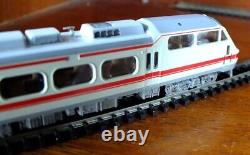 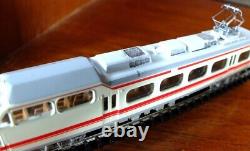 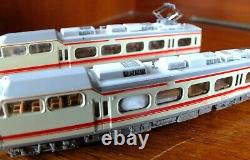 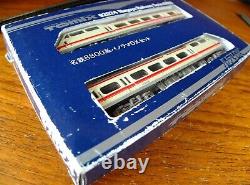 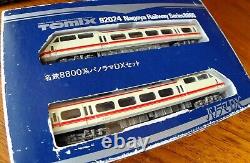 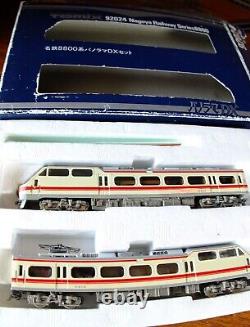 This nice N gauge train pack by Tomix is 92024 a two car Meitetsu 8800 set in the standard corporate livery. Referred to as Meitetsu, is a private railway company operating around Aichi Prefecture and Gifu Prefecture of Japan. The Meitetsu 8800 series was a limited express electric multiple unit type operated by the company from 1984 to 2005. It was used on Panorama DX services. The trains started service in 1984 as 2 car units.

A third car was inserted between all sets starting from 1989. However, with the decline of tourism related services, the 8800 series were relegated to trans-city expresses. As the 8800 series only had a top speed of 110 km/h, compared to the top speed of 120 km/h on "Panorama Super" trains, the 8800 series were slowly taken out of service, with all being withdrawn by late January 2005, and scrapped by March the same year. The 8800 series was the recipient of the 28th Blue Ribbon Award held in 1985. The train is in good condition, with some attempt at weathering by a previous owner and tested and the box is rather shelf worn. It is tested and run well (see pictures). Do please have a look at my other listings, I typically have various HO and OO locos on offer as well as an extensive range of imported N gauge locos and other items. This item is in the category "Collectables\Model Railways & Trains\Railways & Trains\Locomotives".