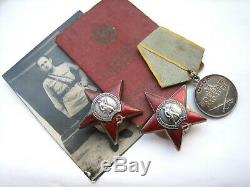 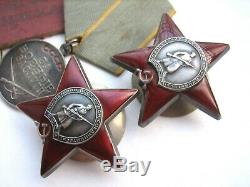 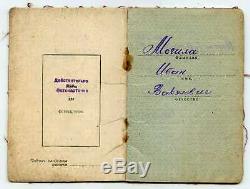 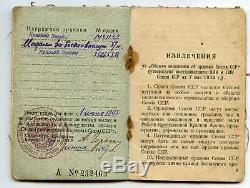 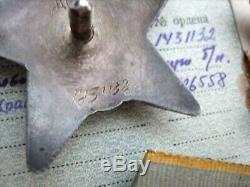 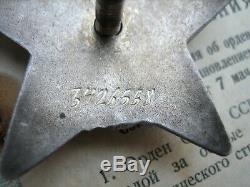 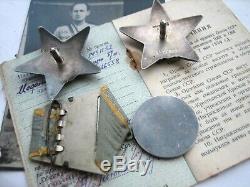 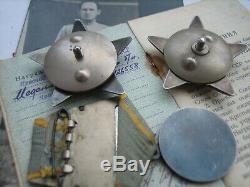 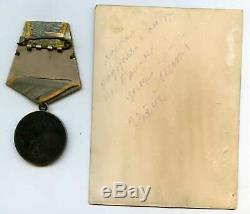 Two Orders RED STAR and WW2 Medal SET for Soviet Tankman. + Document and Photo 1940s. Awarded - l ieutenant Mogila Ivan Wakulovich is the commander of the SU-76 (-76) tank (self-propelled anti-tank gun) of the 1896th Red Army Artillery Tank Regiment. Lieutenant Mogila was awarded the Order of the Red Star for fights near the villages of Dubrovnik, Zhitkovtsy, Dolga-Vas in Slovenia in the spring of 1945. In these battles, lieutenant Mogila's tank destroyed an armoured personnel carrier, 3 mortars, 4 machine guns and about 40 fascists.

Information from the site archive of the Red Army. On a photo the officer of the Red Army, with the two orders Red Star, 1940s. Photo size 89 x 119 mm. Information about awarded is in archive Ministry of Defence of the USSR.

100% original old autentic awards. And document and photo (no reprint, no copy). Documents and photo can have spots, holes, traces of glue, dirt, gluing together, adhesive tape, field repair of paper and other damages are old historical artifacts. In our shop there are no cheap lots - but not because we are too greedy.

Just we sell 100% original authentic items. Be attentive - not all that shines - it is gold.

Dear Customers, you will receive exactly the same item which you see on the pictures, not similar or other. Enamel and documents can have small damages and chips - this awards rushed in field conditions. I will answer all your questions. The item "SOVIET WWII Two Orders RED STAR and WW2 Medal SET for Soviet Tankman SU-76" is in sale since Thursday, November 7, 2019. This item is in the category "Collectibles\Militaria\WW II (1939-45)\Original Period Items\Russia\Medals, Pins & Ribbons".

The seller is "suommi11" and is located in Kharkiv, default. This item can be shipped worldwide.